A Good Deed
Image de la Comtesse
The Moving Finger Writes...
Note to the author of the fourth gospel
(Sort of) Clerihew for Descartes
The Hamlet Syndrome

If you had seen blind Homer with his harp,
on Chios maybe, on a dusty street
crowded with chariots and heavy carts,
busy and difficult to cross, you would
have given him your arm and told him: “Master,
hold on. I’ll see you to the other side.”
When there you’d find him some place in the shade
to sit, and call the water carrier for
a cup to wet his mouth. You would not seek
reward – except perhaps to say to him:
“Master, could you recite a line or two
so I may tell my children that I heard
the magic from your lips?” And he would ask:
“Which lines my child?” and you would have replied:
“Sing me the story of Achilles’ grief
over the death of his most precious friend.”
So, plucking at his harp strings he would sing:

“A black grief struck Achilles; with both hands
He poured the dust and dark ash on his head
Defiling his fresh tunic and fair face.
The mightiest of the mighty, in the dirt
Outstretched upon the ground, tore at his hair.”

Wiping your tears you’d ask again: “O Master,
in dreams I’ve seen Patroclus lying there,
slaughtered by Hector in Achilles’ stead.
What were the lines about the funeral pyre?”
And, pausing for a moment, he would sing:

“Achilles like a father robbed by death
Of his own new-wed son, wailed for his friend.
He burned the bones and paced with heavy tread
And ceaseless groans around the funeral pyre.”

“The greatness of Achilles” you would say,
was never greater than the moment of
his grieving for the friend who died for him.”
You’d weep and bow your head, but through your tears
you’d hear the poet, soft in recitation,
saying the words Patroclus, in rebuke,
hurled at Achilles sulking in his tent
while the Achaeans bled beneath Troy’s walls.

“Who was your father, you who have no pity?
No, not the master horseman Peleus;
Nor was your mother Thetis. The gray sea
Spawned you on the cliffs, inflexible man!”

And when you looked up, he’d be gone, and you
left wondering if you’d wakened from a dream. 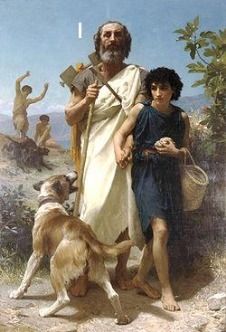 Illustration:  Homer and his Guide by William-Adolphe Bouguereau, 1874. The setting is the countryside and the guide protects Homer from thieves and dogs, but I saw something more like a boy-scout's good deed in helping a blind man cross the street.
***********************
This poem was first published in Academic Questions, copyright Springer-Verlag, 2011.
The fragments from the Iliad (my own translations) are from The Tribal Imagination
IMAGE DE LA COMTESSE 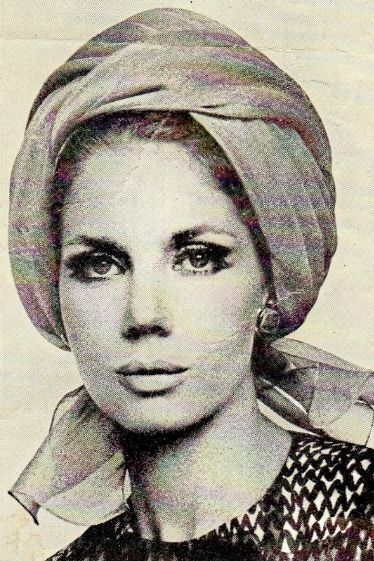 When I look at this face/I know/that I am not rational/(unbelievable belief) that bothers me perhaps/but/I am even so a very wise fool/at least/I would fight for this face.
When I look at this face/I think/that I could never be/master of myself(unbelievable this belief)because enslaved by this picture/in the end/I would kill for this face.
When I look at this face/I fear/that it might be the Devil's agent/(pretty believable belief/you surrender me into his hands/where blinded by the slavery/happily/ I would die then for this face.
When I look at this face/I believe/that it makes the words of god a fable/(very believable belief)/Prince of darkness listen to me/you followers listen too/my soul/I would sell it for this face.
The above poem (from my Violent Imagination/Passionate Mind) was posted on a web discussion site, by an anonymous reader with flattering compliments (I remember "Wow!") Many people who have read the poem have asked if there was a real countess and a real "image" that inspired the poem (which first appeared in an obscure US journal: Bulletin des Professeurs Francais et Francophone en Amerique.) There was indeed. Here is the original. I saw it in Robert Ardrey's apartment in Rome, in a copy of Vogue, took it with me to Israel, and wrote the poem on the plane. (See Participant Observer 519-523 for details). The countess held the record at the time for appearances in Vogue as a model, and I think for Vogue covers. She was called "one of the hundred most exciting women in the world." Of course I was thinking "Helen of Troy" - "Is this the face that launched a thousand ships/And burned the topless towers of Illium?" (Marlowe, Dr. Faustus) She was an expert in Indian art and design and helped many Indian artists like Manu Parekh, (below) find a market in Paris. This painting of his  - "Festival 1" - was used as the jacket cover for The Violent Imagination and The Passionate Mind. 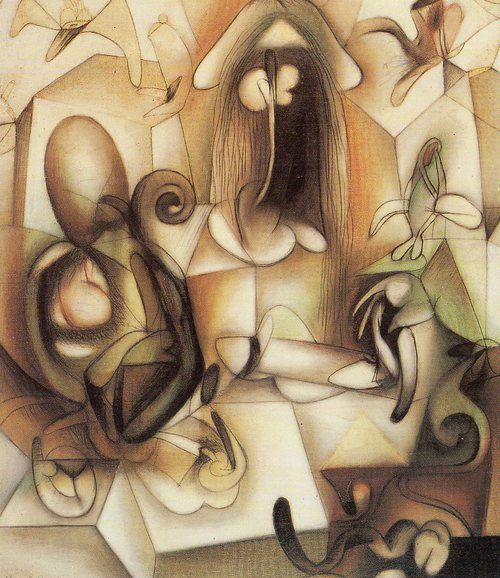 
The Moving Finger writes; and, having writ,
Moves on: nor all thy Piety nor Wit
Shall lure it back to cancel half a Line,
Nor all thy Tears wash out a Word of it.

J. T. Fraser, the founding president of The International Society for the Study of Time, had a project to collect translations in all languages for Fitzgerald’s famous quatrain, to be published in the journal Kronos. He asked me to do one for Irish Gaelic and I sent it, but I don’t know if it was ever published. He wanted me to send it with a letter inviting colleagues to send in their versions. This is from my letter to him:

“I am enclosing this preliminary version, not as complete fulfillment but simply to show you that I have not forgotten altogether. I need (a) to check it with a Gaelic scholar to make sure there are no bloopers (it is forty years since I spoke the language) and (b) to check if a version does not already exist. I don’t know of one, but I have a feeling someone must have tried it before this. For better or for worse, as a token at least, here is mine.

Writes the finger moving, and after that
Moves it onwards, and will cancel out
Neither piety nor wit (it), nor will wash away
One word or half-line of it your tears.

So you see it is a pretty literal translation at least, while having the genuine form of Gaelic verse. Once I have satisfied myself on the two points, I’ll write the letter you suggest. Fortunately, time is not of the essence.”

Time however proved to be of the very essence, for this great man died before the project could get underway. The moving finger writes… 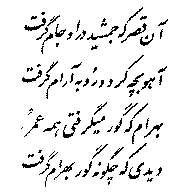 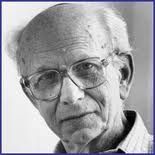 Even for those who do not read Arabic, the shape of the letters shows clearly the rhyme scheme (reading right to left) is AABA, just as Fitzgerald reproduced it.
(Sort of) Clerihew for Descartes

"Cogito ergo sum"
Is frighteningly dumb.
Make it (not to alarm us):
"Sumus ergo cogitamus."

The Word was not made flesh, Evangelist;
That's really quite absurd.
As  good Darwinians we must insist:
'Twas Flesh that made the word. 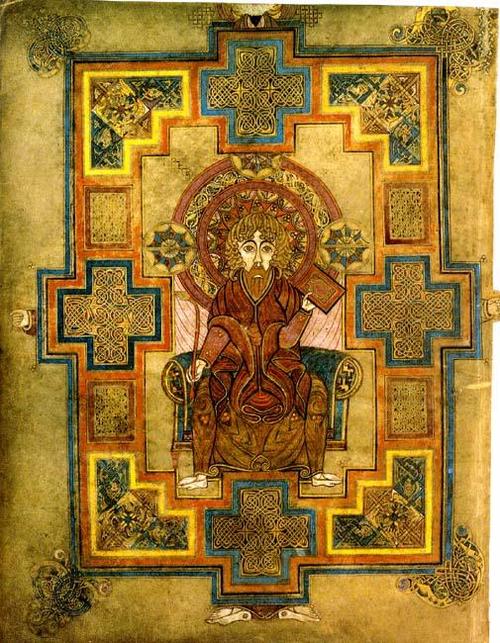 St John from the book of Kells

"The time is out  of joint, O cursèd spite
That ever I was born to set it right."
Hamlet 1:5

The jointless time was Hamlet's bane.
On tablets he inscribed his pain.
The playwright shared his angst so we
Are partners in the misery.

What I have had to say, I've said.
One morning soon I'll wake up dead.
The time will still be out of joint.
O Hamlet, was there any point?

(See the last lines of Participant Observer for the answer) 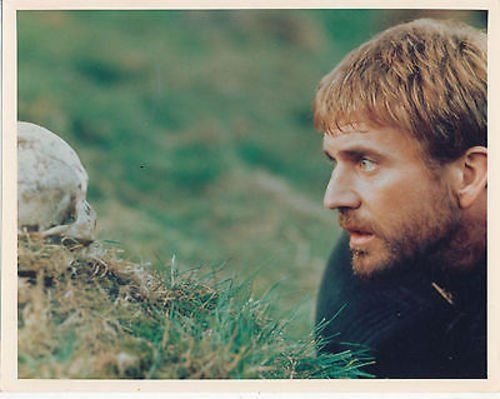 From The Character of Human Institutions

Editor’s Note: Following are the words for “The Cross-Cousin Rag,” including the Charles Asnavour ( French) version of Verse 1

Robin notes that the second verse refers to the George Homans and David Schneider argument (in Mar­riage, Authority and Fi­nal Causes, 1955) that marriage with the mother’s brother’s daughter was prevalent because it was “sentimentally appropri­ate”—an argu­ment famously disputed by Rodney Needham in Structure and Sentiment, 1962.) 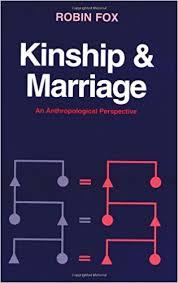 Permission to reprint any material on this page is granted, providing authorship is acknowledged.