Old Verse
Poems and verses since The Passionate Mind

(with a little  music to soothe the savage breast)

(Copyright © Robin Fox 2010. May be quoted if authorship and source is acknowledged. Some of the verses originally appeared in Pivot online journal.)

Life Is Too Short

When we were young and all the world was green,
We used to tell each other: “Life’s too short” --
To justify our sins. We didn’t mean
It literally of course. Now we are caught
In its stark literalness, and so we know
(We wheezing, balding ones way past our prime,
Whose memories melt away like last year’s snow)
The humorless reality of time:
Of time foreshortened, of the loss of friends,
Of old ambitions unfulfillable.
We curse the destiny that shapes our ends,
And ‘til recorded time’s last syllable
Confront, with shaking limbs and labored breath,
The loss of beauty, and the fear of death.

If-music-be-the-food-of-love.com
Burn me a copy on a CD ROM,
That surfeiting on graphic interface,
I’ll consummate my love in cyberspace.

When in the storage space of wasted bytes
I read descriptions of the fairest wights,
I hit delete and send them on their way:
Shall I compare thee to a summer’s day?


The Universe of Love

The Birdie and the Bunny (for Alexander)

(Tune “Song of the Herring” - folk song from Donegal)

Well the birdie and the bunny
Were so busy with their fight,
That they overlooked the pussycat
Approaching from the right.
Then the whole damn thing was over
Just as quickly as a cough,
‘Cos the moggie ate the birdie
And the bunny buggered off.


How are Things in Tora Bora?

(To the tune of “How are things in Glocca Morra?” – from Finnian’s Rainbow)

I think I hear some birds,
Waziristani birds,
It well may be
They’re bringing me
Madrassa words.

I think I feel a breeze,
An al-Jazeera breeze,
It well may be
It’s come to me
Across the seas.

So tell me please:

How are things in Tora Bora?
Are the Taliban still hiding there?
Does the mullah with the gleaming eye
Go chanting by,
And have you ever seen such a charmer there
As Osama there?

How are things in Tora Bora?
Are the F15s still bombing there?
It’s much safer down in Kandahar,
But that’s too far
To go for Friday prayer.

So I ask each young jihadi,
And each girl who wears a veil,
And the lad who wants to blow himself away:
How are things in Tora Bora this fine day?


Reflections on the Rabbi

The Rabbi we call Jesus (think instead
Of Yeshua Bar-Yussef*) did not claim
To be the Son of God; he simply said
We all are sons of God: that spreads the blame.

The scruffy rabbi with the dirty hair
Urged that we concentrate our minds upon
The prospect of the Kingdom, and repair
The damage to our souls that greed had done.

He trashed the gaudy temple of the self,
Leaving no place for piety to hide.
He made each giant ego seem an elf,
And shook his buttocks at the sons of pride.

Self-abnegation does not suit our age,
So we rewrite the gospel for the times
When every chorus boy wants center stage,
And poets seek to profit from their rhymes.

* “Jesus” is the Latinization of Greek “Iesous” (abbreviated "Iesu") itself a rendering of Aramaic “Yeshu” which in turn is an abbreviation of “Yeshua” – “Joshua.” So for us to be consistent, Jesus should really be called “Josh.” There  is also the Arabic god figure "Issa" who figures in the Koran and his name is used to translate "Jesus" thus causing confusion.  It is this "el Issa"  whom ISIS devotees expect to lead them in the final war in Jerusalem against the infidels.


So when he told us “turn the other cheek,”
Did he mean it literally, we wonder?
When he gave earthly title to the meek,
Did that include petroleum rights thereunder?

The way – the televangelists seem to know –
To reap the profit and write off the loss,
Is, like each pious Christian CEO,
To nail our golden handshakes to the cross.

O earnest little rabbi by the lake,
Bless loaves and fishes so the hungry feed;
But don’t you understand, for goodness sake,
The trickle-down effect of private greed?

Our ingenuity is plain to see -
The Holy Church turned up the vital clue:
In reconciling God and Mammon we
Ignore your teaching, but we worship you.

We figure if we deafen you with praise
That you won’t notice when we deviate;
And do we really need you in these days
When rabbi Greenspan* rules the interest rate?

The awkward little rabbi with the quiz,
No longer is around to pry and nod.
We render unto Ceasar what is his:
On Sunday mornings we can deal with God.

* This dates these verses: “Bernanke” doesn’t scan, but "Yeltsin" would fit.


Derek and the Working Girls

When Derek Freeman, the notorious anthropological critic of Margaret Mead, was at the height of his psychoanalytical phase, (around 1963-4 in London) he not only photographed phallic doorknockers in Bloomsbury, but went round the cafés in Soho asking the working girls how they assessed the virility of a client. It was absolutely characteristic of Derek that he was not interested in the girls for sex, but for information on phallic symbolism. They judged by the ties, he told me: they said that they preferred long red shiny ties as indicators of sexual prowess. They didn’t like wearers of bow ties, nor did they like clergymen in uniform, he added, and that showed that the clerical collar was a castration symbol. They liked tight, not baggy trousers on men. He said the girls in Singapore didn’t like men in Bermuda shorts. (He was there when the Australian navy retook the city from the Japanese. He remembered the admiral announcing that the sailors could rape and loot, but they must not disturb or destroy any official records. This had a profound effect on him, as did the behavior of said sailors.) Men who talked too much, or appeared too clever, he discovered, also put the girls off. This particularly satisfied him.

I wrote the following for him then. He was amused. It has been in a file ever since.

No self-respecting whore would want to lie
With a client in a polka-dot bow tie,
And would dismiss with sharp contemptuous snorts
A john in baggy check Bermuda shorts.

Yet she will happily trust herself in bed
To one whose tie is silky, long and red,
And gleefully trust her scarlet-painted lips
To a man whose pants cling tightly to his hips.

So you of the bow tie or Roman collar,
Can you buy passion even with the dollar?
The lady, after all, is not a stone,
She cannot live or love by bread alone.

Respect this ancient wisdom of the whore
These ladies, after all, should know the score.
Remember: clothing indicates the man
Far better than vocabulary can.

So quips in Greek or epigrams in Latin
Will not excite like ties of shiny satin,
And all the wit that pious learning gleans
Has not the eloquence of clinging jeans.

“Song of the Women”

Queen of heaven, how he lies!
How dare he say he’s logical?
Our body nothing signifies,
Our fate’s not biological.
Hera hear us!
Sweet Athene
Wreak destruction on his wienie!
Let him fear us!
Dear Medusa
Save your snakes for the seducer.
Hear the miscreant weep and moan
When you turn his prick to stone!

Diana, mistress of the hunt,
Abjuring all things phallical,
Make him bow down before thy …..

(Here - the translator notes - the fragment breaks off.)

*It is hard to know what the original might have been, although it seems to be a reference to the Maenads. This stage direction is probably an interpolation by the unknown translator.

The garden snake has
finished his business with the
Buddha.   The sea calls.

The sea ripples and
murmurs,still it sighs and hums,
still it is empty.
(from the Mayan Popol Vuh)

Way up in Northern Jersey where the Jets and Giants play,
They've got a holy quarterback - at least that's what they say,
And he kneels down and says this prayer when he goes out to play,
"Loving Jesus help me when I throw the ball."

The Nets they moved to Brooklyn but the Jets they didn't care,
They went and got Tim Tebow and a quarterback to spare,
And each time he went out to play he said this little prayer,
"Loving Jesus help me when I run the ball."

(Come to think of it, where is Tim Tebow anyway?) (Answer: trying to make it in minor league baseball.)

From The Character of Human Institutions

Editor's Note: Following are the words for “The Cross-Cousin Rag,” including the Charles Asnavour version of Verse One.  Robin notes that the second verse refers to the George Homans and David Schneider argument (in Mar­riage, Authority and Fi­nal Causes, 1955) that marriage with the mother’s brother’s daughter was prevalent because it was “sentimentally appropri­ate”—an argu­ment famously disputed by Rodney Needham in Structure and Sentiment, 1962.) 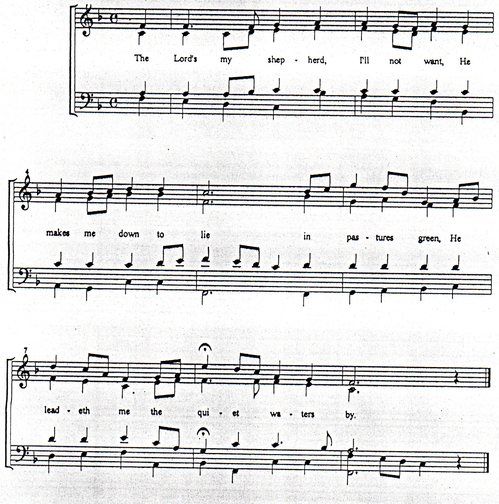 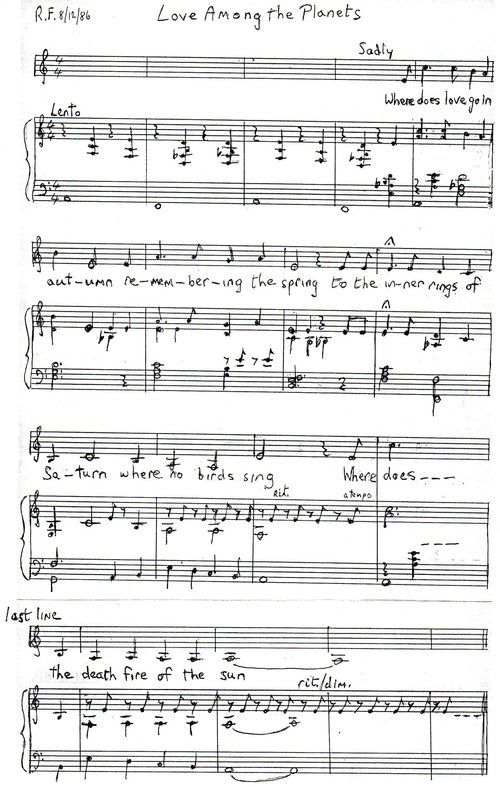 "Love Among the Planets: Ballad for the Ghost of Yeats" from The Passionate Mind  (Violent Imagination)

Note the discrepancy between the verse and the song in line 4 of verse 1
Some confusion with the memory of La Belle Dame Sans Merci? Memory plays these clever tricks,

A version with some slight alterations is pending.  The original had no bar lines, in imitation of Satie, who appears in a sonnet.  No one got it, of course, so I put them in  here. 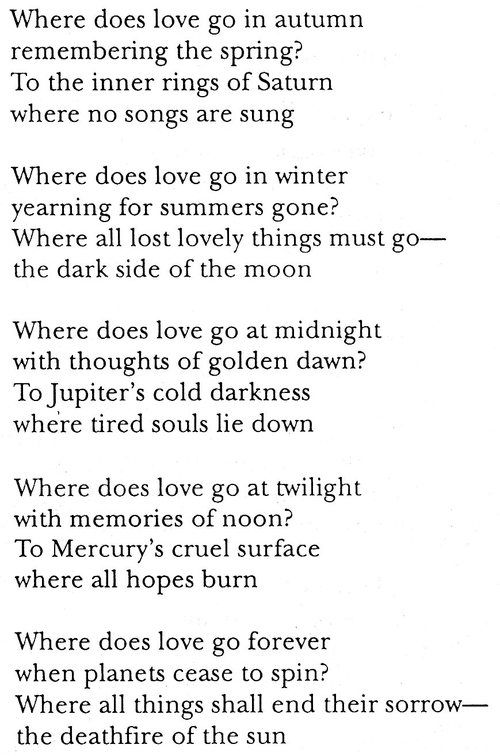 David Jenkins wrote this poem after reading Participant Observer "Antelope Man" (Kutztiwa) was the name the Cochiti Indians of New Mexico gave Robin Fox, because of his springy walk they said. 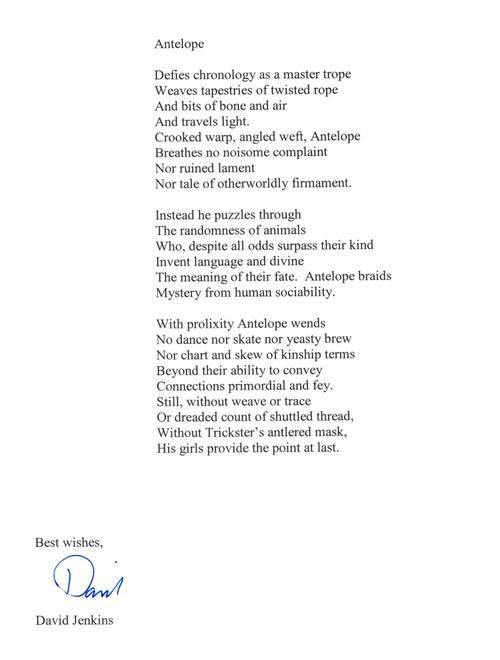 Permission to reprint any statement on this page is granted, providing authorship is acknowledged.