This is a preliminary introduction to the idea of the course.

I inherited the title and course description, but it is close enough to what I want to do.

We shall look at how anthropologists go about “explaining” things across the four fields of the discipline. Sometimes the explanation is universal, sometimes very local. To use examples from my own work, “Why do we have incest taboos?” is very different from, “Why do twenty-percent of husbands and wives on Tory Island not live together?” But they are both “why?” questions and seek causal answers, albeit of a very different kind. Sometimes “how?” or “what?” questions have to be answered before the “why?” questions can be posed. “How do we perceive time?” comes before “Why do we perceive time the way we do?” “What kinds of social groups do monkeys live in?” has to precede “Why do monkeys live in different kinds of social groups?” A lot of anthropology is conducted at the “how?” and “what?” stage, which is very necessary, but not as much fun as the “why?” questions.

I have usually avoided teaching my own stuff in courses, but it has been put to me that this is to rob the students of more than fifty years experience in all four fields of anthropology, so I am relaxing that rule and we shall pick topics from areas of my research and use them as the ground reading on which to base explorations into related work by many others. The following are suggested topics: all “why?” questions that can lead us into the heart of many anthropological (and therefore human) puzzles.

Why are some societies polygamous and some monogamous?

Why are there witches? Why do we need myths? Why do bureaucracies fail?

Why is a deal a deal? Why are there fathers? Why is nepotism ineradicable?

Why did the Romans call their maternal nephews “grandson”?

Why do some societies have no words for relatives-in-law?

Why did God forbid the Israelites to boil an animal in its mother’s milk?

Why did the brain evolve so quickly? Why do women have orgasms?

Why do we fall in love? Why is the maternal uncle a privileged relative?

Why do guys like to hang out together? Why is blood thicker than water?

Why do religions fragment into sects? Why are we fascinated by violence?

Why do Tory Island husbands not live with their wives?

Why are there so many languages? Why do complex societies rise, and then fall?

Why do we avoid the long view of time? Why do we prefer intuition to logic?

There are many more possibilities, but we shall choose from these. Some of the reading is from recently published articles and so is on disc and can be easily distributed. Earlier things are in my books, for example:
Kinship and Marriage, Encounter with Anthropology, The Red Lamp of Incest, The Challenge of Anthropology, Reproduction and Succession, The Tory Islanders, Conjectures and Confrontations, The Search for Society.

I have some remaindered copies of the last one, which I shall give out. If I decide you must buy any of the others (probably just Challenge) any royalties will be returned to the department. I will try to find a way to put some of this stuff on the web for you, but I’m new to this.

Just as examples of possible topics:

On the rise and fall of complex societies, we shall read my chapter “The Origins of Social Complexity” in Challenge of Anthropology, which discusses this topic using the examples of the Calusa of SW Florida and the Anasazi of Chaco Canyon NM. We shall watch (some of) a film on “The Mysteries of Chaco Canyon” and discuss theories of its rise and fall, such as the chapter in Collapse: How Societies Choose to Fail or Succeed, by Jared Diamond. The Calusa based a complex civilization on fishing, and were thought to be the only example of a complex society based on fish as opposed to settled agriculture. We shall look at them (VCR) and at an example from Peru (perhaps watching some of “The Real Temple of Doom” DVD) that seems to show a similar pattern (reading parts of Michael Mooney’s The Maritime Foundations of Andean Civilization.) We shall ask what these examples tell us about why complex societies arose, flourished and inevitably fell.

On the female orgasm, we shall read my chapter “The Female Orgasm: Adaptation or Accident” in Challenge, which argues that it is indeed an accident and serves no reproductive function. We shall watch a film (if I can find it) on the behavior of sperm during orgasm, and look at explanations by those like Desmond Morris, Melvin Konner and Randy Thornhill, who argue that it is functional and hence adaptive. We shall set this in a discussion of the evolution of mating strategies, and perhaps take a final vote on the issue.

A detailed syllabus with the weekly reading and ancillary readings will be given out in the first class. (If it is done in good time I’ll post it.) Each week we shall all read the basic essay, and some of us will also read related work by other anthropologists. There will be presentations and vigorous discussion. Points will be scored for challenging the instructor’s position. Occasionally there will be visual aids (as in the above example.) I don’t know yet what form of exam will be used. Depends on the class. Some combination of take home exam and short term paper perhaps.

This is a 400-level seminar, and your active participation is essential. A background in anthropology is not required; in fact a diversity of backgrounds is an advantage for the course. We shall approach the issue of “explanation” in anthropology, not in an abstract way, but with a series of “case histories” from the instructor’s work. Each week everyone will read one or two chapters from Search or Challenge, or a chapter or article on disk, as indicated. In addition, individuals will prepare brief reports from the “other readings” which are expansions, related topics, criticisms, or downright disagreements with the position taken in the general reading. You should prepare a brief write-up of each of the “other readings” that you tackle, and these will count towards the grade. A short term paper on one of the topics or a related topic will complete the assignment. For this you should use all the “other readings” on the topic, and others that will be discussed individually. I have most of the books and articles assigned and will lend them out or e-mail them to you. “Film” or “Film clip” means brief excerpts from one or more films for illustrative purposes. (See course outline on anthro. web site under 410.)

Challenge: Chap. 1 “Food and Eating Out.”

Eaton, Shostack and Konner, The Paleolithic Prescription, Chaps. 3 and 4: “The Discordance Hypothesis”: “The Stone Age Diet.”.
Jared Diamond, The Third Chimpanzee, Chap. 11. “Why do we smoke, drink and take dangerous drugs?”
Larry Zuckerman, The Potato, either Chap. 4, “Vive la pomme de terre” or Chap. 10 “Potatoes and Population.”
Mary Douglas, Purity and Danger, Chap. 3 “The Abominations of Leviticus.”
Richard Wrangham et el. “Out of the Pan, into the Fire: How Our Ancestors’ Evolution Depended on What They Ate.” In Frans de Waal (ed.), Tree of Origin. (reprint.)
[Or, “The Raw and the Stolen: Cooking and the Ecology of Human Origins.” Current Anthropology. 40:567-77, 1999 (reprint.) Or “Cooking as a Biological Trait” Comp. Biochem. & Phys. Part A 136, 35-46, 2003 (reprint.)]
Lionel Tiger, The Pursuit of Pleasure, Chap. 5. “Big Mouth.”
W. C. McGrew & A. T. C. Feistner, “Two Nonhuman Primate Models for the Evolution of Human Food Sharing.” Chap. 4 in Barkow, Cosmides and Tooby, eds. The Adapted Mind (1992)

1. What are the outstanding features of human mating systems that demand explanation?

2. What are the competing explanations of the female orgasm? Can they be reconciled?

Again, what are the competing explanations for the incest taboo?

1. What are the roots of human violence and aggression? What is the role of imagination and ritualization? Is aggression a disease or a normal process?

Challenge. Chap. 5. “Aggression Then and Now.” Chap. 6. “The Human Nature of Violence.”

2. Contrasting views on the nature of history, and the causes of war.

Is there a specific need for males to bond? What role do females play? Is it explained by the evolution of hunting and war? How does it manifest itself in literature?

Fox, “Male Bonding in the Epics and Romances.” From The Literary Animal, Imber and Wilson eds. (2005) (Expanded version on disk.)

Differing views (very!) on the sources and nature of human rights.

Why do a fifth of Tory Island (Ireland) husbands and wives not live together?

Why do some simple societies move to complex organization? Why do they then always collapse? Do they need an agricultural surplus to develop? The role of seafood. Anasazi and Calusa. (with a glance at Norte Chico.)

Jared Diamond, Collapse: How Societies Choose to Fail or Succeed. Chap 4 “The Ancient Ones: The Anasazi and their Neighbors.”
Darcie McMahon and William Marquardt, The Calusa and their Legacy. (Selections)
William Marquadt, “The Emergence and Demise of the Calusa” in Brose, Cowan and Mainfort eds. Societies in Eclipse (2001) (reprint) Michael Mosely, The Incas and Their Ancestors (Selections)
Charles Mann, 1491: New Revelations of the Americas Before Columbus, Chap. 6 “Cotton (or Anchovies) and Maize.”

Week 10 Nov. 13. Break. Use this week to get ahead with reading. There will be a short writing assignment due on Nov. 20.

Challenge: Chap. 15. “Myth and Mind: With a Note on the Fragmentation of Trickster.”

What happens when we think? Why does it happen that way? What is rationality?

1. Frazer and the explanation of religion/magic. Comparative and cross-cultural methods.

Challenge, Chap. 10. “The Golden Bough and the Descent into Anthropology.”

On the comparative method:
Fox: “Lewis Henry Morgan and the Reason for Anthropology.” (disk: introduction to Morgan’s Ancient Society.)

On the cross-cultural method:
E. B. Tylor, “On a Method of Investigating the Development of Institutions.” JRAI 1888 (reprint) (the original)
Whiting, Kluckhohn and Anthony, “The Function of Male Initiation Ceremonies at Puberty.” In Newcomb and Hartley eds. Readings in Social Psychology 1958 (reprint)
Or: Whiting, JWM, “The Effects of Climate on Certain Cultural Practices” in Goodenough ed., Explorations in Cultural Anthropology (1964) (reprint)
Whiting and Child, Child Training and Personality, Chap. 8 “A Test of Negative Fixation.”

2. Explaining the Ten Commandments. Sympathetic magic and the flood.

Fox: “Which Ten Commandments?” In Society (Jan.-Feb. 2006) Reprint, and expanded version on disk.

A full circle to Totemic and other social categories. Why are totems so often taboo? How do we remember? Why do we dream? The evolution and role of emotions.

How does the explanation of the past and present contribute to our assessment of the human future? I’ll give the pessimistic view; you prepare the optimistic one.

Search Chap. 10. “Consciousness Out of Context: Evolution, History, Progress and the Post-Post-Industrial Society.”

Fox The Violent Imagination (selections inc. “The Trial of George Washington” “What the Hunter Saw” “Design Failure: a Post Tutorial Dialogue” “Psalm One Hundred and Fifty One” etc. (Copies will be distributed.)
Fox: Conjectures and Confrontations “What the Shaman Saw: Incident at Lascaux circa 15,000 B.P.” (reprint) 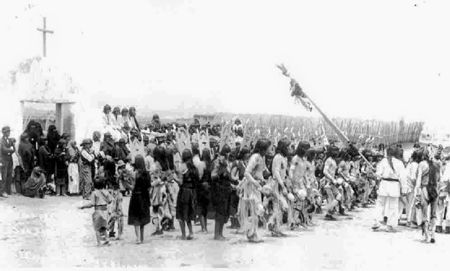 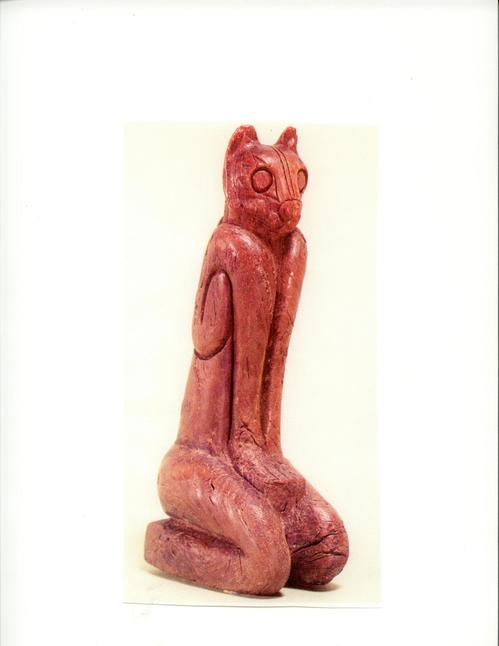